You are here: Home > Journey into Session 2 Icon Class Beginning February 20
By Debra Korluka on February 2, 2020 in Announcements, Classes and Workshops, Events

“Holiness and intelligence of soul are to be recognized from a person’s eye, walk, voice, laugh,and the way his/her time and company he/she keeps. Everything is transformed and reflects an inner beauty”- St. Anthony the Great

We will write the icon of The White Angel (The Holy Myrrh bearers at the Tomb). Icons offer a journey into a transformation from earthly and material to heavenly and illumined.

The White Angel is believed to be Archangel Gabriel, sitting at the entrance of Christ’s empty tomb, announcing His resurrection to the myrrh-bearing women.
The prototype for this icon is a detail of a fresco from the Mileseva monastery circa 1230 AD in Serbia, called Myrrhbearers on Christ’s Grave or the Holy Women at the Tomb.

About the White Angel

Sitting calmly, the angel of the Resurrection points out the empty tomb to the holy women, who withdrew in terror on beholding the sight. He then commanded them to tell the disciples that Christ has risen from the dead. The scene is best described by the passage from the gospel that the fresco depicts.
“And when the sabbath was past, Mary Magdalene, and Mary the mother of James, and Salome, had bought sweet spices, that they might come and anoint him. And very early in the morning on the first day of the week, they came to the sepulchre at the rising of the sun. And they said among themselves, Who shall roll away the stone from the door of the sepulchre for us? And when they looked, they saw that the stone was rolled away: for it was very great And entering into the sepulchre, they saw a young man sitting on the right side, clothed in a long white garment [White Angel]; and they were frightened. And he said to them, Do not be frightened: You seek Jesus of Nazareth, who was crucified: he is risen; he is not here: behold the place where they laid him. But go your way, tell his disciples and Peter that he goes before you into Galilee: there you shall see him, as he said to you.” The Gospel according to Mark chapter 16.
Orthodox Iconography consists of portable/panel icons, frescoes (wall paintings on fresh plaster) and Orthodox mosaics. Some of the greatest, priceless treasures of Byzantine Iconography are adorning the walls of Eastern Orthodox churches in the form of frescoes and mosaics. Among those, Serbian early and medieval fresco painting takes a prominent place. Built of stone, thousand years old Serbian churches carry some of the most majestic iconographic masterpieces that have, by some art historians, surpassed later Italian Renaissance frescoes in beauty and skill. 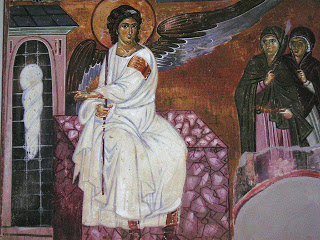 Mileseva Monastery/ 1230 AD
A prayer upon completing an icon
You, yourself, O Lord,
Are the fulfillment and completion
Of all good things.
Fill my soul with joy and gladness,
For you alone are the Lover of Humankind.
Let your grace sanctify and dwell
Within this icon,
That it may edify and inspire those
Who gaze upon it and venerate it,
That in glorifying the one depicted,
They may be repentant of their sins
And strengthened against every attack
Of the adversary.
Through the prayers of the Theotokos,
The Holy Apostle and Evangelist Luke,
And all the Saints,
O Savior, save us!
AMEN.