You are here: Home > New Icon Installation at The Basilica of Saint Mary
By Debra Korluka on November 19, 2019 in Announcements, Events

This year’s Annual Icon Festival is bringing forward an icon newly installed at the Basilica in September 2019.

Please visit the brochure about the month’s events iconFestival25 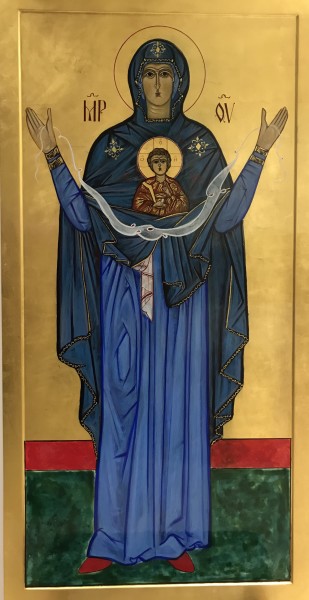 Icons of Mary Mother of God/ Mary Untier of Knots

Besides Christ, the basis of all iconography, no other subject has been more depicted than Mary, the Theotokos (Greek for “Mother of God”, literally “God-Bearer”). It shouldn’t be surprising: no human being resembles Jesus Christ more than His Mother. We can certainly look to her as an example of what it means to be “Christ-like”.

The tradition of the Orthodox Church maintains that the first iconographer was the evangelist Luke, and that the first icon he painted under divine inspiration was of the Mother of God holding the Christ-child. Just like the icon of Christ Pantokrator,icons of the Son of God with His Mother are powerful testimonies to the reality of God’s incarnation as a human.

Mary is shown wearing a veil typical of Jewish women of the period, an historical fact no doubt, but which also reveals to us her humility and piety. The veil is red, the color of divinity, whilst the clothes under the veil are green or blue, the colors of humanity. This is the exact opposite of the usual depiction of Christ: Who has humanity worn upon His eternal, divine, nature. As the evangelist Luke records, the angel Gabriel said to Mary: “The Holy Spirit will come upon you, and the Power of the Highest will overshadow you” (Luke 1:35) And so this is shown in Mary’s veil.

Also upon her veil are three stars, which represent her eternal virginity: before, during, and forever after Mary’s pregnancy she remained a pure virgin. Suffice to say that the ever-virginity of Mary is dogma within the Church that is proclaimed in its artwork.

On the icon, Mary Untier of Knots, Mary looks directly at us, she is depicted in orant (prayer) position. The Infant is identified to us as Jesus Christ (abbreviated as IC XC), Who even as a child is shown with a scroll, embodying all the wisdom of the true God. His halo contains those three Greek letters meaning “I AM”, testifying to His divinity, and even as an infant His right hand is shown giving a blessing. He is shown as truly divine, truly wise, and truly the source of all blessings.

Icons of the Theotokos most importantly show us Mary’s humility, her piety, her tenderness, and the sorrow she endured. Properly inspired and painted, an icon of Mary can truly reveal her love for us, and draw us closer to her. Above her head are the letters “MP OY”, an abbreviation of the Greek: “Mater Theos” – the Mother of God. Yet even this grand sounding title tells us more about the nature of her Son, Jesus, than about Mary herself and so once again leads us back to Christ. This is what we know about Mary and why we love her: through her we receive her Son, the Saviour of mankind, God in the flesh, Jesus Christ. The icons of Mary embody this teaching and this love. The prototype of Mary Untier of Knots further depicts Mary holding a veil of knots signifying that through her intersession of prayer she will guide us to the Saviour who above all will give us strength to persevere all human pain and temptation into healing and reconciliation in the life of the Church. (resources:Icon Reader)