You are here: Home > 2018 Session 2- SS Peter and Paul Icon
By Debra Korluka on October 20, 2017 in Announcements, Classes and Workshops

Session 2 shall study and write the icon of The Embrace of SS Peter and Paul.

The feast day is commemorated June 29.

St. Peter and St. Paul were Great Apostles of Our Lord Jesus Christ. The icon that we shall write in class is a prototype depicting them in brotherly embrace symbolizing their unity of love and faith in Christ. Both were transformed from ordinary men to servants of the Most High God, and became living icons of the Lord they worshiped and loved exceedingly. The panel offered in class will be an authentic gesso prepared board size 11 inches by 13 inches flat with struts. Panel cost approx. $95.00. An ampersand clay board (cradled) is also adequate.

Saint Peter is brother of Saint Andrew the First-Called. He was a fisherman by trade, unlearned and poor, and was called Simon. He was renamed Peter by the Lord Jesus Christ, Who looked at him and said, “Thou art Simon the son of Jonas; thou shalt be called Cephas (meaning rock; for the rock of his confession of Christ as the living Son of God)” (John 1:42).

St. Peter led the early church and converted thousands. After the Resurrection and the descent of the Holy Spirit he preached in Judea, Antioch, certain parts of Asia, then had finally came to Rome. Peter was the first Bishop of Antioch where followers were first called Christians.

St. Paul was a Pharisee. He persecuted the Church with great zeal and violence. Later he was transformed by a vision of Christ on the road to Damascus, which blinded him to earthly sight, giving him Divine wisdom. He became the greatest of missionaries.

He spoke eloquently and with strength in the synagogues, proclaiming that “Christ is the Son of God” (Acts 9:1-21). He traveled over large areas of the Roman Empire, preaching the Gospel while proclaiming the Christian faith. His fourteen letters are an important part of the New Testament.

Peter and Paul were martyred in Rome under Emperor Nero in the year 87. Peter was crucified, head down at his own request so that he would not die in the same way as Christ. Because Paul was a Roman Citizen, he was beheaded. 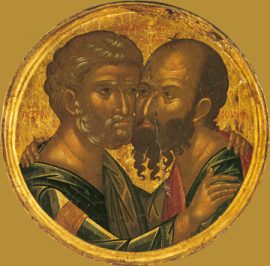