2017 Session 2 Icon Class will write an icon of The Crucifixion and will study the History of the Cross. We will follow the development of various styles through the ages such as the Ukrainian Orthodox Cross, Ukrainian Catholic Cross, Byzantine Cross, Russian Orthodox Cross, the Greek, Latin and St. Andrew Crosses. 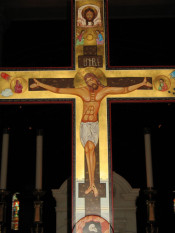 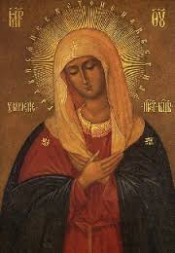 In general:
The Mother of God always is and will be with those who are faithful to her Divine Son; who go according to His call to eternal salvation. She, according to St. John Chrysostom, is the first Receiver of Divine gifts and the first Giver of these gifts and blessings to people who seek help from the Lord and mercy from her. Thus it will always be, until the final hour, until the final second of the life of the world.
And let the hearts our faithful, who know the great power of the intercession of the Mother of God, ever fall at the feet of the Mother of God with heartfelt sighing, with their needs and sorrows, in all trials, and in moments of lamentation over sins. She, the Joy of all who sorrow, our heavenly Mother, will spread out upon us her sovereign Protection, intercede for us, save us, and have mercy upon all of us. Amen.
St. Seraphim of Sarov, a 19th-century Russian monk … is said to have practiced a devotion nearly identical to the Rosary … St. Seraphim would pray this devotion daily, kneeling in his cell before an icon of the Theotokos.

This Tendernessicon is very unusual, in that it depicts the Blessed Virgin alone, without her son. In fact, it was possibly not a traditional Orthodox icon at all, but a Western image of Our Lady. This image, which St. Seraphim called “Joy of All Joys,” represents Mary’s feelings of tenderness at the Annunciation.
With oil from the lampada that burned before this holy icon, St. Seraphim would anoint the sick and they would be healed. He was praying in front of this icon when he died on 2 January 1833. After his death, the abbot gave the holy icon to the sisters of the monastery at Diveyevo. The icon is sometimes known as the Seraphim-Diveyevo icon of the Theotokos, after the convent where it now resides.
Note : Weather or not the icon depicted above is the exact one before which St Seraphim prayed is questionable.