You are here: Home > 2015 Session 2 Icon Class- Icon of The Theophany/Baptism of Christ
By Debra Korluka on January 22, 2015 in Classes and Workshops

Session 2 begins on Thursday February 12th.  Students will study and write an icon of

The Theophany/ Baptism of Christ: 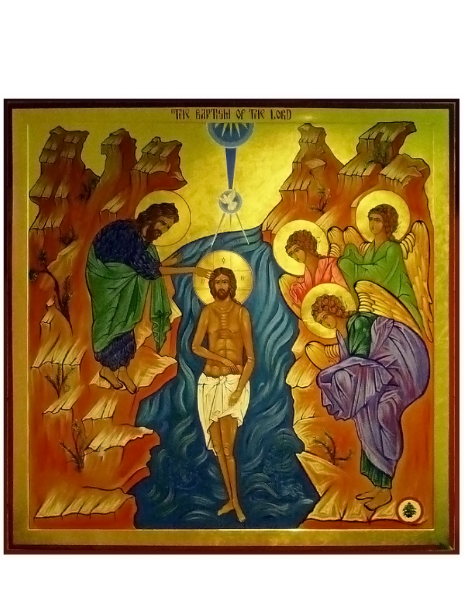 The icon demonstrates the Epiphany (revelation) of the Holy Trinity, otherwise known as Theophany, a Greek word for manifestation meaning “revelation of God” (Greek). This Feast day celebrates the Baptism of Christ in the Jordan river. The Feast is accounted for in Scripture: the Gospels, Matthew (3: 13-17), Luke (3:21-22) and Mark (9:1-13). The icon reflects the readings.
Then Jesus came from Galilee to John at the Jordan to be baptized by him. And John tried to prevent Him, saying, “I need to be baptized by You, and are You coming to me?”
But Jesus answered and said to him, “Permit it to be so now, for thus it is fitting for us to fulfill all righteousness.” Then he allowed Him. When He had been baptized, Jesus came up immediately from the water; and behold, the heavens were opened to Him, and He saw the Spirit of God descending like a dove and alighting upon Him. And suddenly a voice came from heaven, saying, “This is My beloved Son, in whom I am well pleased.”
(Matthew 3:13-17)
Christ– is in the center of the icon standing in the water. He has come to be baptized by John. He does not need baptism but submits to it to unite Himself with us. He is blessing the water of the Jordan. Christ’s hands are not shown in prayer, but in a sign of blessing. Rather than the waters of Jordan cleansing Christ, it is Christ Who purifies the waters.
Christ’s cloth that He is wearing – reminiscent of the burial cloths he will wear as a reminder to us of His sacrifice. It is the color white to signify cleansing, renewal and purity.
Father – is represented by the half-circle of light at the top of the icon from which the rays of light come forth;
The Holy Spirit – descending in the form of a dove present above Christ’s head. This together with the Father is the Holy Trinity which is manifested to us today and every day and to which we give glory and praise.
St. John the Baptist – stands to the left of Christ in the act of baptizing Christ. He is dressed in animal skins. We know from Scripture that he has been living in the desert and preaching the coming of the Messiah. He is the Precursor, the one who comes before. He also preaches repentance and conversion; he reveals Jesus as the “Lamb of God” (John 1: 29-34). Although he does not feel worthy to baptize Jesus, because he recognizes who Jesus is, John agrees to the Baptism because Jesus insists.
Angels – stand to the right of Christ. Their hands are covered. They wait to attend to the needs of Jesus but they will not touch Him with their bare hands because He is God. It is a reminder to us that as we approach Christ to do so with reverence.
Small tree in the foreground with an ax near its root – represents the tree that does not bear good fruit. “ Even now the ax is lying at the root of the trees; every tree therefore that does not bear good fruit is cut down and thrown into the fire.” Matthew 3:10. It is in contrast to Jesus’ life which bears abundant fruit – everlasting life.
The River Jordan– the image revealing water sanctified by Christ, becoming not a symbol of death but of birth into a new life.
Two small figures at the feet of Christ– illustrate Old Testament texts, which enter into the services of the feast and are a prophetic prefiguration of Baptism. The male figure in the water reflects t he words of the Psalmist regarding the Messiah (Christ): “the sea saw and fled, the Jordan turned back” (Psalm 114:3). The female figure is an allegory of the sea and refers to the crossing of the Red Sea by the Jews.