You are here: Home > Byzanfest 2015
By Debra Korluka on January 9, 2015 in Announcements, Events, Projects

Icon Art Studios announces its support as a sponsor to Byzanfest Film Festival in offering the book Seeking the Face of Christ- The Way of an Iconographer as a prize for the Best Performance category.  Deb will also be offering her services as a judge in the upcoming film festival. 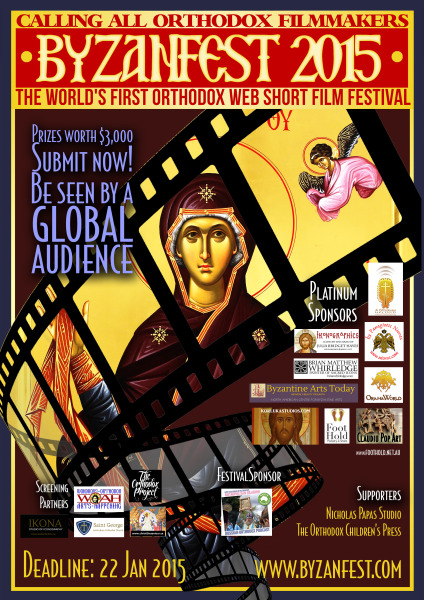 from the founder/director– Established in 2014 by the Orthodox Filmmakers & Artists (OFA) site, Byzanfest is the first web-based film festival dedicated to Orthodox Christian short-films. The aim is simple: screen the very best Orthodox stories and share them with the world.

Byzanfest strived to create something new and innovative, not to be limited by the physical constraints of a traditional venue-based festival. Byzanfest looked ahead towards the future of entertainment and wanted to engage globally with both Orthodox and non-Orthodox viewers.

It’s online, on-demand & world-wide. The Festival encourages interactivity where viewers can share their thoughts through all social media platforms.

The Festival showcases films which reflect Orthodox Christian themes, beliefs, culture and values. However, an entry’s storyline does not necessarily have to be ‘religious’. Although the film may not appear to have ‘Orthodox’ subject matter, it can still be deemed Orthodox because it was created by an Orthodox Christian filmmaker who maintained an Orthodox phronema (‘mindset’) during the creative process, remaining faithful to their Christian sense of dignity, morality and self-respect.

The name ‘Byzanfest’ is in honour of the great Byzantine Empire, a place of great wisdom, art & Faith. Although it may no longer exist, the spirit and values of Byzantium shine out in the works of Orthodox Christians in this digital-era.

Voices of Icons by Hans W. Florin
2015 Session 2 Icon Class- Icon of The Theophany/Baptism of Christ