You are here: Home > Apprenticeship Study- Part 3
By Debra Korluka on October 1, 2014 in Announcements

The icon Not Made by Human Hands is also called the Holy Face or the Mandylion. The story surrounds King Abgar, king of Edessa who was seriously ill and lived during the earthly life of Christ. The king knew of Christ’s healing power and sent his court servant/painter to seek out Christ and to bring Him to the king. The crowds of people prevented the servant to come near to Christ, but Christ knew that the king needed healing. Christ proceeded to press His Face into a cloth (the original “Made-Without- Hands Icon”, mandylion), imprinting the cloth with His image and gave the cloth to the servant. The servant brought the cloth to his king and King Abgar was thus healed.

The Holy Face, the Church’s first icon is significant for iconography because the Word of God took flesh in Christ and became part of the material world. Christ Himself gave us His image, His Face, on the cloth for the King of Edessa. It is why we can make images that represent Him. This is the image where we began Michael’s study.

To begin, part of the task of the iconographer is to explain our Orthodox iconographic tradition about the interior placement of icons in the Church. The Church herself has determined the selection and placement of the icons. I brought Michael into a current project at St. Stefan Romanian Orthodox Church in South St. Paul.  I wanted him to understand the significance of the placement of iconography in various architectural spaces within a temple. St. Stefan’s presents an Orthodox temple which can correctly implement the traditional program of iconography meaning what icons are to be painted and where they are placed according to tradition as directed by canon. St. Stefan’s is a domed cruciform church with an apse. It faces to the east and is built according to architectural Orthodox Church tradition.

An iconographic pattern follows cycles in the interior of the architectural space. Taken from The Guide to Byzantine Iconography by Constantine Cavarnos, the three major cycles are: the doctrinal cycle, the liturgical cycle and the festal cycle.

So here I can share with you the work on an icon that Michael assisted with.  It was most appropriate for his study to enter into painting the icon of The Holy Face (The Holy Icon Not Made with Human Hands) in an experience as though the icon would be for the purpose of the interior of a church. We chose to create a variation with angels flanking the image to comply with the placing of this icon traditionally found in the arched apsidal space (making up the doctrinal cycle) before the sanctuary for this reason:

from “Holy Face, Holy Script and Holy Gate”-
one of the earliest and most characteristic Mandylion images in Eastern Christian iconographic programs is situated above the arched pas- sageway in the sanctuary barrier. To the left is depicted the Virgin enthroned from the Annunciation scene. To the right, appears the representation of the prophet Isaiah, pointing to the Mandylion by a gesture of blessing and holding an open scroll originally inscribed with his famous prophesy (Is. 6:14) that Immanuel would be born of a virgin. That inscription gave a clue for the interpretation of the message: the Mandylion between the Virgin and Isaiah is depicted as a sign of the Incarnation, and a visual confirmation of God’s presence on earth. Another aspect of the concept is connected with the theory of icon veneration. In a statement of the Second Council of Nicaea, the icon is «the fulfillment of the prophetic reflection», an embodiment of Isaiah’s prophesy that «a virgin shall conceive in the womb and bring forth a son.

This particular method involved painting the icon in acrylic technique on canvas.  The approach of painting this icon included an overall evaluation of media, technical considerations and wall painting techniques. When considering the interior decoration of a temple an artist must know how media and technique will respond in any given are and climate in order to make the best possible decision in regard to their longevity and condition over a long period of years/centuries. 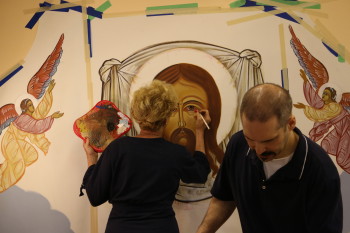 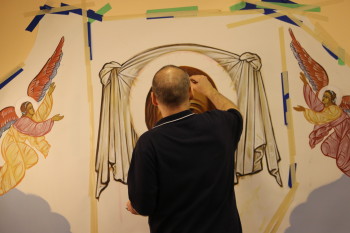