You are here: Home > Project: St. Stefan’s Romanian Orthodox Church
By Debra on June 5, 2014 in Projects

The initial project will be to replace the icons of the 4 Evangelists in the pendatives.

In the upcoming weeks we will be installing the icons of St. Matthew and St. Mark once scaffolding is moved to the other side of the church. The tetramorphs will still be added to the icons as viewed in the pictures above, these being St. Luke and St. John. In Christian art the tetramorph is the union of the symbols of the 4 Evangelists, the four living creatures derived from the Book of Ezekiel, into a single figure. Portraits of the Evangelists are commonly portrayed with their correlating winged symbolic creature… 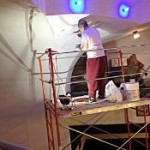 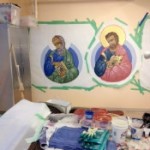 From “Guide to Byzantine Iconography” by Constantine Cavarnos:

Why have these four living creatures been used by iconographer’s to symbolize the four evangelists?

The reason why:
The man has been used as a symbol of Matthew may be the fact that he begins his Gospel with a long list of men, the genealogy of Christ according to the flesh. For Luke, the calf seems to be the most appropriate symbol, because he is the only Evangelist who speaks of a calf-“the fatted calf”- (15:23,27,30), which according to the parable of the repentant Prodigal Son, the good, forgiving father killed for the feast that he prepared for his returned prodigal son. The eagle is probably used for the Evangelist John because he soars like an eagle in his exalted description of the Divine Logos, Christ, at the beginning of his Gospel, and in his emphasis on supra mundane Divine love, saying that God is love (1 John 4:8). The symbol of the lion was utilized for denoting St.Mark perhaps because at the very beginning of his Gospel he speaks of “the voice of one crying aloud in the wilderness” which brings to mind the roaring of a lion. Although the other Gospel writers also make mention of this manifestation of Saint John the Baptist, Mark gives it greater emphasis than by speaking of it at the very outset, and thus impresses it more firmly on the mind of the reader. The inclusion of these form symbols in the depiction of the four Evangelists provides a Scriptural justification for painting the Evangelists on the four pendatives. They are shown as though round the heavenly throne of God (mentioned in the Apocalypse already quoted), Who is represented above them in the dome as Christ Pantocrator. 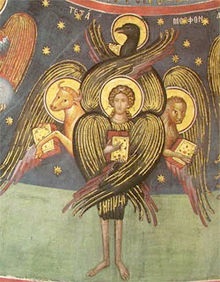 “An icon demonstrates the highest divine beauty, which cannot be shown through lines and colours, but it is in its symbols like a hymn in musical signs or lacy hieroglyphs. It discovers us legends of unknown to the world treasures.” – Archimandrite Raphael

View all posts by Debra →