You are here: Home > 2016 Session 1 Icon Class
By Debra Korluka on July 2, 2015 in Announcements, Classes and Workshops

Why is that session 1 icon class introduces a student of iconography into the image of The Holy Face?

The Holy Face
The icon Not Made by Human Hands is also called the Holy Face or the Mandylion. The story surrounds King Abgar, king of Edessa who was seriously ill and lived during the earthly life of Christ. The king knew of Christ’s healing power and sent his court servant/painter to seek out Christ and to bring Him to the king. The crowds of people prevented the servant to come near to Christ, but Christ knew that the king needed healing. Christ proceeded to press His Face into a cloth (the original “Made-Without-Hands Icon”, mandylion), imprinting the cloth with His image and gave the cloth to the servant. The servant brought the cloth to his king and King Abgar was thus healed.
The Holy Face, the Church’s first icon is significant for iconography because the Word of God took flesh in Christ and became part of the material world. Christ Himself gave us His image, His Face, on the cloth for the King of Edessa. It is why we can make images that represent Him. We venerate Christ and the saints in their Holy images, where worship is given only to God.
The icon, “The Holy Face”, represents the Church’s first liturgical icon and is venerated above all icons on the Feast of Orthodoxy. (This feast is commemorated the first Sunday in the forty days of Great Lent in the Byzantine Calendar and kept in memory of the final defeat of Iconoclasm and the return of the holy icons to the churches on 19 February, which was the first Sunday of Great Lent, 842 AD ordained by the Synod of Constantinople).
There could not exist any icon until God revealed Himself and in Jesus Christ the fullness of God was made manifest to the world. The invisible God chose to make Himself visible so that we can commune with Him and become one with Him. His Holy Face fills our souls with great magnitude of iconographic joy. He reaches out to us in love, He invites us to know God, He comes to us not to condemn but to save. His Face remains open to all the sorrows of the world. In His Face we see everything which encompasses human nature; body, soul, emotions, thoughts and will; all exist in perfect harmony, beautiful and transparent to the light of Divine Nature.
And the Word became flesh
and dwelt among us,
and we have seen His glory,
glory as of the only-begotten from the Father,
full of grace and truth.
(Jn 1.14) 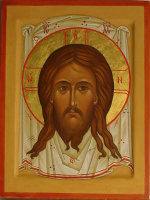