You are here: Home > Apprenticeship Study- Part 2
By Debra on September 1, 2014 in Announcements

The study began with an introduction to egg tempera technique. Michael has had previous experience with many medias, this was the first time Michael worked with egg tempera. The greatest challenge for Michael was to learn how to conform to the parameters of Byzantine canonical style and technique. This is a very common challenge for all artists trained in different and creative styles of individual expressions conditioned in artistic liberty. On the other hand, Byzantine iconography follows a structured formula of archetypes and methodology preserved in the liturgical tradition of the Church. Michael understood the seriousness of the role that this art form plays in worship and history. When struggling with the challenge and feeling artistically blocked, he would attempt to support his participation from an educational angle, for example, seeking theological readings about the development and meanings of prototypes and symbols in iconography.

We explored the significance of the stages involved in the technical process. Michael had great reverence for the spiritual language and the need for the proper approach to the work. We began our work on a white gessoed panel. I obtain my panels from a colleague in Serbia.

PANEL- The panel is prepared with many layers of gesso with an embedded linen/cotton cloth. Technically, the cloth protects the image from organic changes in the wood over time. Spiritually, it brings remembrance to the Holy Face which is the church’s first liturgical icon. This icon was made NOT by human hands but by Christ Himself as He wiped His image on the Cloth of Edessa. We can not encounter faith without Christ revealing Himself to us. The people in the Old Testament were forbidden to depict living beings because the essence of life is the presence of God Himself who is invisible, incomprehensible, and indescribable. The human spirit can not grasp Him unless God reveals Himself, and in Jesus Christ the fullness of God was made manifest to the world. The invisible God chose to make Himself visible so that we can commune with Him and become one with Him. The wood panel represents the tree of life. The application of the gesso involves watering the suspension down which signifies water as the life giving source and which all life springs forth.

GESSO PANEL- The universe was created from emptiness; the gesso is a symbol for the potential of what will come. It is the initial starting point of the forward moving journey opening our heart to the Gospel teachings which in turn allows our return to paradise, as the white gesso suggests. God created the world out of silence leading to an attitude of prayer. A prayer of inner silence and tranquility; a way for every man to practice his daily life. The practice of inner prayer brings man to a deeper level of realization and peace, separate from influences around him. The practice of writing icons is an aid in this type of prayer as one continues to paint and practice. White is the combination of all color. Color symbolizes man’s life and intensity in the journey, the cycle reveals a potential which is already inherent, as faith is not created anew but that which is already inherently discovered.

Michael’s study consisted of participating together in the project of two very large and complex icons in acrylic technique and our own icons in egg tempera technique. Towards the end of the study he worked on icons in the solitude of his own work space. 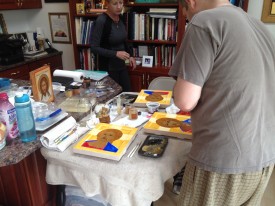 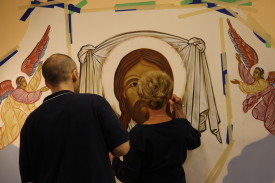 In the upcoming parts, I will discuss why we chose the prototypes of choice and will continue to discuss stages of technique and Michael’s development. 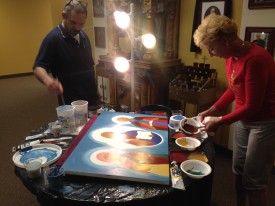 View all posts by Debra →