You are here: Home > Thank You for a Good Session 1 Icon Class
By Debra Korluka on February 15, 2016 in Classes and Workshops, Inspirations

Session 1 Icon Class has just recently ended. We currently are engaged in Session 2 Icon Class with Session 3 beginning at The Basilica of Saint Mary this coming Saturday February 20th.

It is a joy to work with all icon class participants.  Our dialogue is always very enriching. In closure to session 1, I want to share a segment from a lecture by Metropolitan Hilarian delivered at St. Vladimir’s Institute. In my mind, it offers response to some of the questions that contemplated changes and influences occurring to the art of iconography over time. Above all, in the midst of our studies and historical observations leading to greater curiosities, what we must always remember is the icon’s function in the work of salvation which speaks a universal language in the uniqueness of different cultures.

From the lecture from Metropolitan Hilarian:

“An Orthodox believer asks God at every service for a Christian end to his life, painless, shameless and peaceful. He prays for deliverance from sudden death so that he may repent and die in peace with God and his neighbours. The end of a Christian’s life is not death but a transition to life eternal. A visible reminder of this is the icon of the Dormition of the Most Holy Theotokos in which She is depicted lying on her deathbed surrounded by the apostles and angels, Her soul symbolized by an infant taken by Christ in his arms. Death is progress to a new life, more beautiful than that on earth. Beyond the threshold of death Christ meets the Christian soul: this is the message borne by the image of the Dormition. And the Church, in spite of all materialistic ideas about life and death, will always proclaim this truth to humanity.
One can produce many other examples of icons that proclaim particular moral truths. Essentially, every icon bears a powerful moral charge. The icon reminds modern man that, apart from the world in which he lives, there is also the other world; apart from the values preached by irreligious humanism, there are other spiritual values; apart from the ethical norms established by secular society, there are other standards and norms.
The defence of basic norms, of Christian ethics, has become one of the most important tasks for us today. It is not only a matter of mission but also a matter of the survival of the Christian civilization. For without absolute norms in a human community that finds itself in a situation of total relativism where any principle can be challenged and abolished, society is ultimately doomed to complete degradation.
In the struggle for preserving the ideals of the Gospel in human souls, in the struggle against the forces of evil which are so complicated and manifold that we sometimes cannot rely even on rational logic, what can come to our aid is the beauty of outstanding works of genuine art. In the words of Fr Alexander, “I believe that art (from ‘the Christian point of view’) is not only possible and, so to say, justified, but also that only art can be ‘the one thing that is needed’ in Christianity and possibly only art is justified. We can recognize Christ everywhere – in the Gospel (a book), in an icon (painting), in the liturgy (the fullness of art)”.[38]
To end, I would like to say a few words about the exceptional importance of the icon in Orthodoxy and its witness before the world. The icon is a silent and eloquent preacher of Orthodoxy. According to L. Ouspensky, “While in the period of iconoclasm the Church struggled for the icon, in our time it is the icon that struggles for the Church”.[39] The icon struggles for Orthodoxy, truth and beauty. Ultimately, however, it struggles for the human soul because it is in the salvation of souls that the goal and meaning for the existence of the Church lies.” 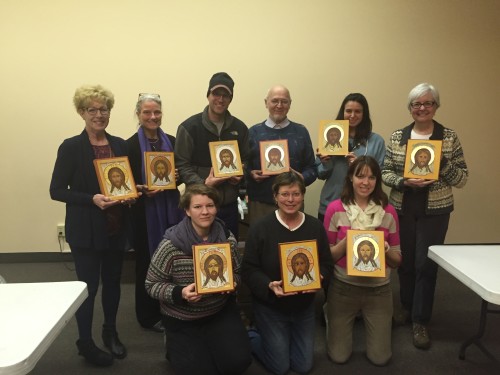